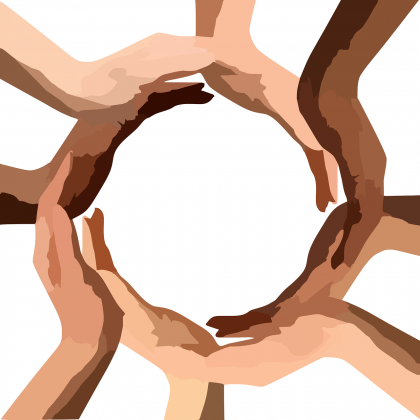 Rev. Linda Hart led a Racial Justice/White Fragility book discussion group that met monthly from September 2018 through May 2019. Everyone was invited to take part in reading and exploring, though it was particularly focused on understanding white experiences and coming to terms with white supremacy culture.

The Social Justice Committee organized and facilitated the Race Matters Discussion Group: Thinking Critically About Racism + Whiteness. The group met monthly, and focused on four areas: Racism 101, White Privilege, White Supremacy Culture, and White Feminism. Wherever a participant was on their anti-racist journey, they were invited to participate in a four-session discussion group to deepen understanding of anti-racism in action through guided readings, podcasts, and videos. Preparation for each session required 2-3 hours, and resources for each topic are listed below.

“What it takes to be racially literate” TEDTalk by Priya Vulchi and Winona Guo, November 2017

“How to deconstruct racism, one headline at a time” TED Talk by Baratunde Thurston, April 2019

“White Privilege and Male Privilege: A Personal Account of Coming to See Correspondences Through Work in Women Studies” Peggy McIntosh, 1988

“The Assumptions of white privilege and what we can do about it” Bryan N. Massingale

“How to recognize your white privilege – and use it to fight inequality” TED Talk by Peggy McIntosh, October 2012

If you read Robin D’Angelo’s “White Fragility” or have heard about it, journal about your reaction to its criticism from BIPOC (Black, Indigenous, and People of Color)

How do “white savior complex” and “white privilege” intersect?

“The Characteristics of White Supremacy Culture” from Dismantling Racism: A Workbook for Social Change Groups by Kenneth Jones and Tema Okun, ChangeWork, 2001

As you review the source materials, please select one quote or fact that either led to a personal “a-ha moment” or ties directly to a story from your past. Did something you learned change the way you think about that story or change how you tell that story?

“Intersectional Feminism: What It Is and Why It Matters” Dear White Women Podcast

“When Feminism Is White Supremacy in Heels” by Rachel Elizabeth Cargle