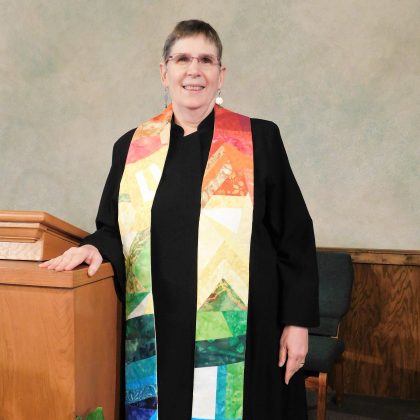 Rev. Linda got to hear Ibram X. Kendi at the UUA General Assembly, and wrote this reflection below for The Inquirer, a Unitarian magazine in the United Kingdom.

The small print in the programme booklet noted that in order to get into the hall where the Ware Lecture would be held everyone would need to be wanded and their bags searched. I gasped as I read it. Never at a Unitarian Universalist General Assembly had I seen such a thing. The speaker, Dr. Ibram X. Kendi, is always surrounded with protection because of the level of threats that he receives.

The Ware Lecture has been an annual event at the UUA’s GA since 1922* and has included such notable people as Martin Luther King, Jr., poet Mary Oliver, and Kurt Vonnegut. Unlike most years, instead of simply lecturing this year the speaker had a conversation with UUA President, the Rev. Susan Frederic-Gray. Each offered reflections on the nature of racism in America and the importance of the ongoing importance of becoming increasingly anti-racist.

One exchange in particular lifted up the complicated work of untangling the history of racism. Dr. Kendi began by describing the official US Census of 1840, in which the government first asked about the mental health of the people being counted. Psychologist Edward Jarvis examined the data and assessed that the Black people in the North appeared to be more likely to be described as insane as compared to the Black people in the South. His scholarly article was published in what was to become the New England Journal of Medicine. He concluded that freedom was driving Black people insane: “Slavery has a wonderful influence upon the development of moral faculties and the intellectual powers,” he wrote. It saves Black people “from some of the liabilities and dangers of active self-direction.”

This, Kendi, continued, was picked up by John Calhoun, a pro-slavery Senator from South Carolina. Calhoun had been among the southern politicians who claimed that slavery was a necessary evil that needed to stay in place in order to keep the economy going. As that belief – that it was a necessary evil – became less popular, a new way of supporting slavery was needed, and Jarvis handed them the new talking point: slavery was a good thing because it kept Black people sane. It’s been substantiated by science, supporters of slavery claimed.

Except that when Jarvis went back to re-examine the data, he discovered that there were significant errors. In one town there were more Black people enumerated as insane than there were total residents. Because of this, he wrote a retraction of the article and published it in the same journal. The pro-slavery movement continued to use his article to support the benefits of slavery.

Kendi reminded us that the work to become increasingly anti-racist is an ongoing process of gaining greater insight and sophistication about the role of race in human relations and institutions and hearts. That growth, he assured us, is matched by an increasing sophistication of the arguments that dehumanize Black, Indigenous, and People of Color (BIPOC). Any time there is racial progress, it is met with resistance. The specifics of the conversations change, and perhaps we see something like progress, but we are far from done with the work of creating greater equity and inclusion.

Rev. Frederick-Gray noted that John Calhoun was a Unitarian, and added that Charles Sumner, a Senator from Massachusetts, who was famous for being an abolitionist and who was nearly beaten to death on the floor of the Senate because of that, was also a Unitarian. We hold both of those histories. A shout from Rev. Dr. Meg Richardson in the audience, a historian from Starr King School for the Ministry, added that Edward Jarvis was also a Unitarian.

While we Unitarian Universalists like to think of ourselves as always on the side of freedom and human dignity, our history does not support that belief. Like most (all?) majority white organizations, we have a mixture of noble ideas and failures of courage to take into account.

Dr. Kendi reflected on the ways in which we shape our conversations about race. In the 19th century and still today, whether Black people were inherently unequal to white people was argued through both nature (it’s in their biology) and nurture (their culture and behavior made them that way). Anti-racists would reject both nature or nurture to say that slavery sought to dehumanize Black people but it didn’t succeed. He also rejected racism as an essential identity. Rather, he reminded us that most people exhibit both racist and anti-racist ideas, thoughts, and behaviors. We need to be descriptive of racist behaviors, ideas and systems and continue the work to dismantle them.

*It was canceled twice over those years: 1945 due to WWII, and 1950 because of the celebration of the 150th anniversary of the founding of the American Unitarian Association.