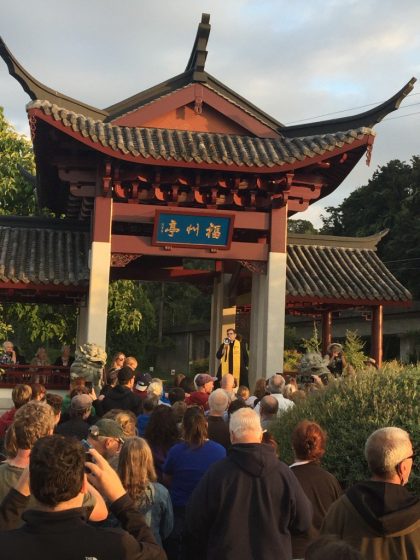 The rally was going to be held at Chinese Reconciliation Park. I was dressed in black and sporting my bright yellow Standing on the Side of Love stole, so I stood out in the crowd. The organizers I asked if I’d be able to open the rally. “Say a few words to begin,” they invited, and so I did.

It was just two days after white supremacists had rallied in Charlottesville. There had been frightening threats of violence and on Saturday there was violence that left one dead and many more injured. Colleagues of mine who were there to bear witness were trapped in a church where all manner of people of faith had gathered to pray and be grounded in love the night before the gathering on Saturday. Young men with tiki torches surrounded the church where they gathered shouting, “White Lives Matter!” The police told them to shelter in place, to sneak out by the back door, to hide.

The synagogue in town had taken out their Torah scrolls and hidden them in a private home in fear that their building would be set aflame or vandalized during the events. It turns my stomach to even recount what happened there.

So a few hundred people turned out, and signed a big sheet that proclaimed our solidarity with the people of Charlottesville, and came together to light candles of hope and promise. I began the formal part of the rally. “Seeing you here gives me hope,” I began. “That we come together at times like this gives me hope. In the face of bigotry and violence, in the presence of white supremacy seeking to seen, we come together to affirm our oneness as a community and say no.” Right in front of me was a woman with a baby on her hip. She held a small cardboard sign that read “Vigils are not Enough.”

Each time the sign caught my eye, I felt a rebuke. Not one of those where someone is screaming in your face about what you did wrong, but that small voice within that asks “Are you doing enough?” 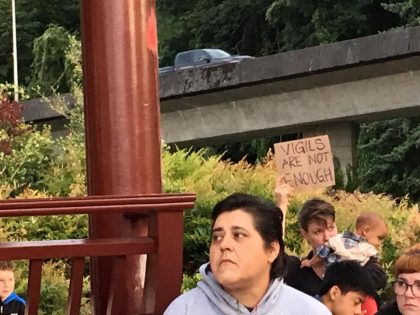 What in the world would ever be enough? We are experiencing the effects of climate change: hurricanes like we’ve never seen before, fires upon fires, flooding in Asia, melting ice caps. We’re seeing the re-emergence of hate groups many of us thought we long vanquished. There’s a chipping away of our democracy by foreign powers and within our own government.

What in the world would ever be enough?

Remember this, a powerful medley of teachings from the Jewish tradition:

Do not be daunted by the enormity of the world’s grief. Do justly, now. Love mercy, now. Walk humbly now. You are not obligated to complete the work, but neither are you free to abandon it.

This year, we as a congregation will continue to do the work that we need to do: Speaking out when we can, using our bodies to protest, calling on our governmental officials to do the work that is most needed, reaching into our hearts and spirits for strength to continue. We’ll also keep on educating ourselves: unpacking white privilege in our own hearts and habits, in our congregation and in the wider community; continuing to cast a vision of the world we dream; continuing to speak of our values and leaning into them so that we build our integrity day by day.