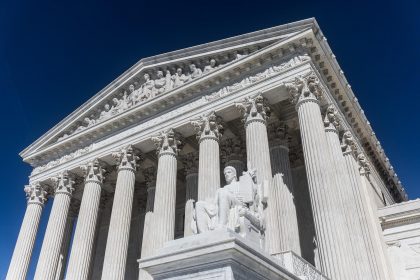 Ever since the news broke on Monday that a leaked draft of a Supreme Court decision indicated that Roe v. Wade would likely be overturned, I’ve tried to find the words to say into this time.

Ruth Marcus in her op-ed “The Leaked Draft Roe Opinion is a Disaster for the Supreme Court” in the Washington Post describes the experience well:

[A]nticipating a calamity, bracing for its impact, is different from experiencing it. Reading the draft Monday night was chilling. “Roe and Casey must be overruled, and the authority to regulate abortion must be returned to the people and their elected representatives,” the draft reads, referring to the 1992 ruling that reaffirmed the core right to abortion.

It might as well have said: The authority to decide whether to continue a pregnancy must be removed from the woman who will have to bear the child and returned to a majority free to impose its moral choices on her.

I want to offer words of comfort for those who are frightened by this step, frightened of the return to back alley abortions, and possible ways to induce a miscarriage that have proved deadly to those who are pregnant. In my adult life I’ve only known the days when abortion was accessible to all and was able to access that care myself when I became pregnant unexpectedly. My heart lurches when I think of the death and injury that will happen at the point that abortion services become difficult to impossible to access for many of those who need them.

It’s a fearful time, and I want to reassure everyone that we’ll find a way, that a just way forward is possible and that with the work of our hearts and hands we can find it. The words form. I’m not sure I believe them.

I also want to shout my outrage. I’m furious about recent history that has enabled this: the election of the former president, the duplicity of the former Majority Leader of the Senate in stacking the Supreme Court, the lies told by the three justices in hearings, the apparent gullibility of a few legislators who claimed to believe the nominees when they affirmed that Roe was settled and not up to be overturned.

It’s a rage-filled time, and I want encourage everyone to use their voice however they can, show up on street corners, march to show our strength, write letters, call Senators and Representatives. Just. Do. Something. And the voice in my head mutters so much that I start to doubt that it’ll make a difference, that it’s just screaming into a void and powers above our station in life have already done the deed, and there’s nothing that we can actually save.

There is only the fight to recover what has been lost

And found and lost again and again: and now, under conditions

That seem unpropitious. But perhaps neither gain nor loss.

For us, there is only the trying. The rest is not our business.

And that’s where we are, friends. Ours is in the trying so we must do what is before us to do: comfort those who are imperiled, those who are frightened, those who feel lost. And then invite them to join with all of us who are trying: writing and calling, showing up in the streets, creating networks to provide what services we can. We need to be doing it what is in our hands, taking breaks as we need to, and leaning back into it again.

And let our community be a place to land, to build some strength and to get back into the work.

The work is always the same. To create justice and equity, to make the world safe for each and all of us. To live in and with and through love always in all ways.