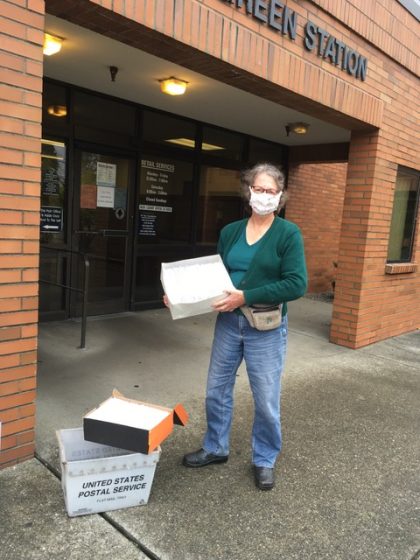 Nationwide, over 17 million letters were mailed by over 180,000 letter writers on The Big Send date of October 17. TUUC had over 20 participants and our grand total was over 3,600 letters mailed!

Our star letter writer was Joan Benderson who wrote 1,060 letters! Here’s a photo of Joan delivering all her letters to the Evergreen USPS Station in Tacoma.

I set a goal for how many Vote Forward letters I wanted to send and divided my goal by the number of days until The Big Send. I wrote letters while listening to Morning Edition on NPR and addressed envelopes while watching The NewsHour on PBS each evening. I wrote out of an abundance of anxiety about the election and what might happen after the election. We mailed the letters on Oct 17 along with our completed ballots. Please vote and vote early!
–Joan Benderson

The Social Justice Committee thanks ALL the letter writers for affirming and promoting our 5th UU Principle:

The right of conscience and the use of the democratic process within our congregations and in society at large.